The US has rejoined the High Ambition Coalition at the UN climate talks, the group of developed and developing countries that ensured the 1.5C goal was a key plank of the Paris agreement.

The decision by the world’s biggest economy and second biggest emitter, after China, to return to the High Ambition Coalition group of countries marks a significant boost to attempts to focus the Cop26 summit on limiting temperature rises to 1.5C, the tougher of the two goals of the Paris agreement. 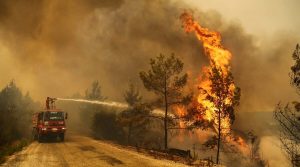 A firefighter extinguishes a forest fire near the town of Manavgat, east of the resort city of Antalya, Turkey

The coalition, which numbered scores of countries at the 2015 Paris talks, will on Tuesday call on governments to step up their efforts on greenhouse gas emissions and phasing out coal, consistent with a 1.5C limit, and urge rich nations to double the amount of climate finance they make available for poor countries to adapt to the impacts of the climate crisis. They also want to bring an end to subsidies for fossil fuels.

Tina Stege, the climate envoy for the Marshall Islands, said: “The High Ambition Coalition has set the bar for what needs to happen at this Cop: getting on track to limiting temperature rise to 1.5C with enhanced [nationally determined contributions] and with real, actual actions, like phasing out coal; a sea-change on adaptation, with at least a doubling of current levels of adaptation financing; and making sure that we all have the resources we need to face this crisis, including the loss and damage we’re already experiencing today.

“These heads of state have given their marching orders for ambition.”