Pulling carbon dioxide from the air by farming 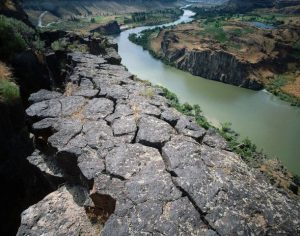 The Working Lands Innovation Center (WLIC) has been partnering with farmers, ranchers, government, the mining industry and Native American tribes in California on some 50 acres of cropland soil amendment trials and their experiments have yielded results that may be another important step in fighting climate change.

Many processes weather rocks on Earth’s surface, influenced by chemistry, biology, climate, and plate tectonics. The dominant form of chemical weathering occurs when carbon dioxide combines with water in the soil and the ocean to make carbonic acid.

About 95% of Earth’s crust and mantle – the thick layer between the planet’s crust and its core – is made of silicate minerals, which are compounds of silicon and oxygen.

When carbonic acid comes in contact with certain silicate minerals, it triggers a chemical process known as the ‘Urey reaction’. This reaction pulls gaseous carbon dioxide from the atmosphere and combines it with water and calcium or magnesium silicates, producing two bicarbonate ions. Once the carbon dioxide is trapped in these soil carbonates, or ultimately washed into the ocean, it no longer warms the climate

Now, emerging science – including at the California Collaborative for Climate Change Solutions’ (C4) WLIC – shows that it is possible to accelerate rock weathering rates.

One compelling aspect of enhanced weathering is that, in controlled-environment studies involving basalt amendments of soil, cereal grain yields are improved by roughly 12%.

As basalt weathers, it increases vital plant nutrients that can boost production and increase crops yields. Mineral nutrients such as calcium, potassium and magnesium create healthier soils. Farmers have been amending soil with rock minerals for centuries, so the concept is nothing new.

Under the 2015 Paris climate agreement, nations have pledged to limit global warming to less then 2 degrees Celsius above preindustrial levels. This will require massive cuts in greenhouse gas emissions.

Pulling carbon dioxide from the air – also known as negative emissions – is also necessary to avoid the worst climate change outcomes, because atmospheric carbon dioxide has an average lifespan of more than 100 years. Every molecule of carbon dioxide that is released to the atmosphere through fossil fuel combustion or land clearing will remain there for many decades trapping heat and warming Earth’s surface.