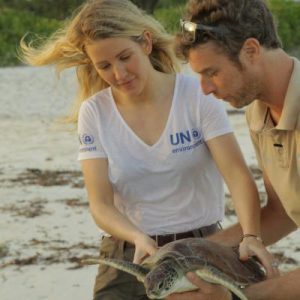 Long-time climate advocate and activist Ellie Goulding joined Tom Mustell and Lucy Siegle for the So Hot Right Now podcast this week and spoke openly about the fears and real impact to artists speaking out on environmental issues.

Despite her tremendous personal reach, with 22 billion social media streamings and 33 million followers overall, across combined social platforms, it’s clear that she has felt obliged to tread carefully in the past.

“Protesting wasn’t seen as cool…. I was really conscious to begin with, not to merge the two and keep my activism really separate. I genuinely thought that activism could jeopardise my job and I believe it has.”

“I lose followers every time I post anything about climate change. I lose at least a thousand followers.”

“Because people are following me for a very specific reason and it’s not the environment.”

“People say ”F**k you for posting this, we don’t want to hear this, it’s not what we’re interested in. Stop preaching. Climate change isn’t real.”

“That’s why there is a lack of artists speaking out about it because they’re just terrified for their job. I get that. I understand that. We can all be honest and say that it has affected some artists’ careers.”

Let’s hope that principled and brave artists like Ellie feel able to continue speaking out despite the cost and use their platforms to provoke thought and debate, on the most important issue of our time.