A huge temperature rise threatens to unfold, as the already dire situation threatens to turn catastrophic due to the combined impact of a number of developments and feedbacks.
The upcoming El Niño
Temperatures are currently suppressed as we’re in the depth of a persistent La Niña event. It is rare for a La Niña event to last as long as the current one does, as illustrated by the NASA image below and discussed in this NASA post. 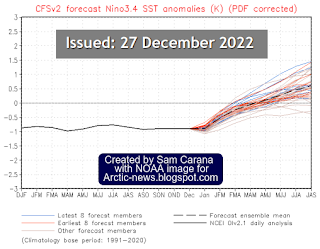 The above image also indicates that a strong El Niño has become more common over the years. The above image was created using data up to September 2022. La Niña has since continued, as illustrated by the NOAA image on the right. NOAA adds that the dashed black line indicates that La Niña is expected to transition to ENSO-neutral during January-March 2023.
Chances are that we’ll move into the next El Niño in the course of 2023. Moving from the bottom of a La Niña to the peak of a strong El Niño could make a difference of more than half a degree Celsius, as illustrated by the image below.
Sunspots 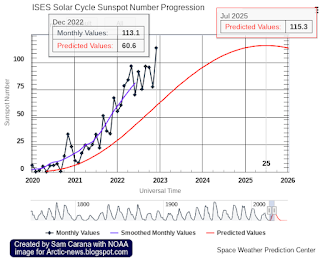 The upcoming El Niño looks set to coincide with a high number of sunspots. The number of sunspots is forecast to reach a peak in July 2025 and recent numbers are higher than expected, as illustrated by the image on the right, from NOAA.

An analysis in an earlier post concludes that the rise in sunspots from May 2020 to July 2025 could make a difference of some 0.15°C. Recent numbers of sunspots have been high. This confirms the study mentioned in the earlier post that warns that the peak of this cycle could rival the top few since records began, which would further increase the difference.

In conclusion, the joint impact of a strong El Niño and high sunspots could make a difference of more than 0.65°C. This rise could trigger further developments and feedbacks that altogether could cause a temperature to rise from pre-industrial of as much as 18.44°C by 2026. 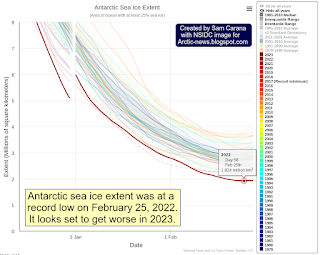 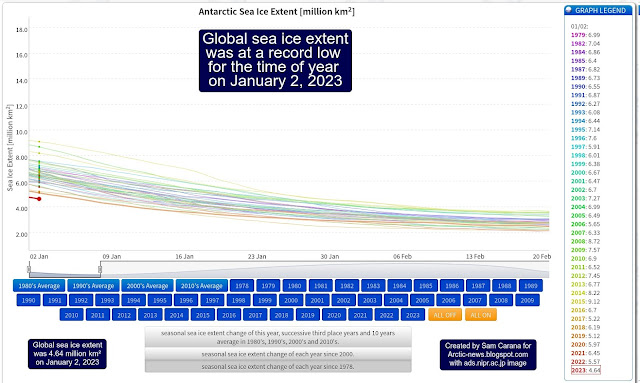 The image below is from tropicaltidbits.com and shows a forecast for September 2023 of the 2-meter temperature anomaly in degrees Celsius and based on 1984-2009 model climatology. The anomalies are forecast to be very high for the Arctic Ocean, as well as for the Southern Ocean around Antarctica, which spells bad news for sea ice at both hemispheres. 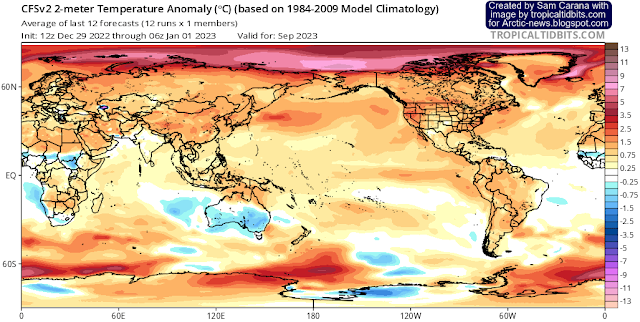 Loss of sea ice results in loss of albedo and loss of the latent heat buffer that – when present – consumes ocean heat as the sea ice melts. These combined losses could result in a large additional temperature rise, while there are further contributors to the temperature rise, such as thawing of terrestrial permafrost and associated changes such as deformation of the Jet Stream and additional ocean heat moving into the Arctic from the Atlantic Ocean and the Pacific Ocean.
There are many further developments and feedbacks that could additionally speed up the temperature rise, such as the (currently accelerating) rise of greenhouse gas emissions, falling away of the aerosol masking effect, more biomass being burned for energy and an increase in forest and waste fires.

As said, these developments and feedbacks could jointly cause a temperature rise from pre-industrial of as much as 18.44°C by 2026, as discussed at the Extinction page. Keep in mind that humans are likely to go extinct with a rise of 3°C, as illustrated by the image below, from an analysis discussed in an earlier post.

The situation is dire and threatens to turn catastrophic soon. The right thing to do now is to help avoid or delay the worst from happening, through action as described in the Climate Plan.